I’ve seen lemon pepper wings around, but I didn’t realize how important they were to Atlanta’s food scene until I read Eric Kim’s article in the New York Times. After reading the article, I had to make them myself…

…and I know, I know. Nothing screams “Northerner!” more than a guy from Ohio reading about Lemon Pepper wings in the New York Times. But, when have I ever let that stop me? I was looking for a new flavor for my pressure cooker wings, and I always see lemon pepper seasoning at the store, so I had to give it a try. They aren’t all that hot – black pepper gives them a little bit of bite, but not much. What they are is a great mix of sweet, spice, and tart lemon flavor. They’re definitely worth the effort.

See recipe card for quantities, or for details on making your own sauce and rub

Chicken Wings: When I can, I buy “party wing” packs from my local grocery store, so I don’t have to butcher the wings myself. If you do by whole wings, get a little extra, to make up for the lost weight from the tips – you only want the wingette (or flat) and drumette pieces of the wing.

Frozen Chicken Wings: If you have individually frozen wings, you can cook them directly from frozen – cook at high pressure for 12 minutes with a quick release. But, the lemon pepper seasoning won’t stick to the wings as well if they are frozen. (Especially if they are ice glazed.) Use half the lemon pepper seasoning on the frozen wings before cooking, and then sprinkle the other half on the cooked wings, right before tossing them in the sauce.

Butter: Now we’re moving into the Lemon Pepper Sauce section of the ingredients. Butter is the traditional liquid base for wing sauces – it clings better to the wings, and, frankly, tastes better. That said, If you want to substitute vegetable oil, you can.

Brown Sugar is my preferred sweetener for this wing sauce, and gives the sauce its tart/sweet flavor.

Ground Coriander: Optional, but I love coriander. It adds an extra spice and lemon depth to the sauce.

Lemon juice: Preferably from a fresh lemon – you need about a half a lemon’s worth of juice for this recipe.

If you want dry wings, replace the “sauce the wings” step with an extra sprinkle of lemon pepper seasoning before broiling.

A 6-quart pressure cooker and the pressure cooker rack that came with your pot. Or, you can substitute a steamer basket for the rack, which makes lifting the wings out of the pot easy. 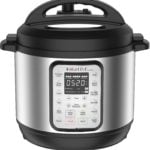 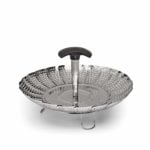 I don’t think chicken wings store well. I eat them right after cooking. I will save leftovers in the refrigerator, where they’re OK for the next day or two, but they’re just not as good as they are when they’re hot.