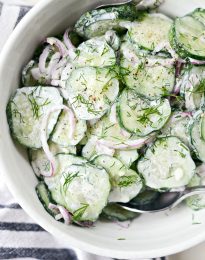 This Cucumber Salad is a recipe that’s been in my family for years. Fresh cucumbers and onions, salted, squeezed and tossed with simple and flavorful sour cream dill dressing. Serves 8 depending. 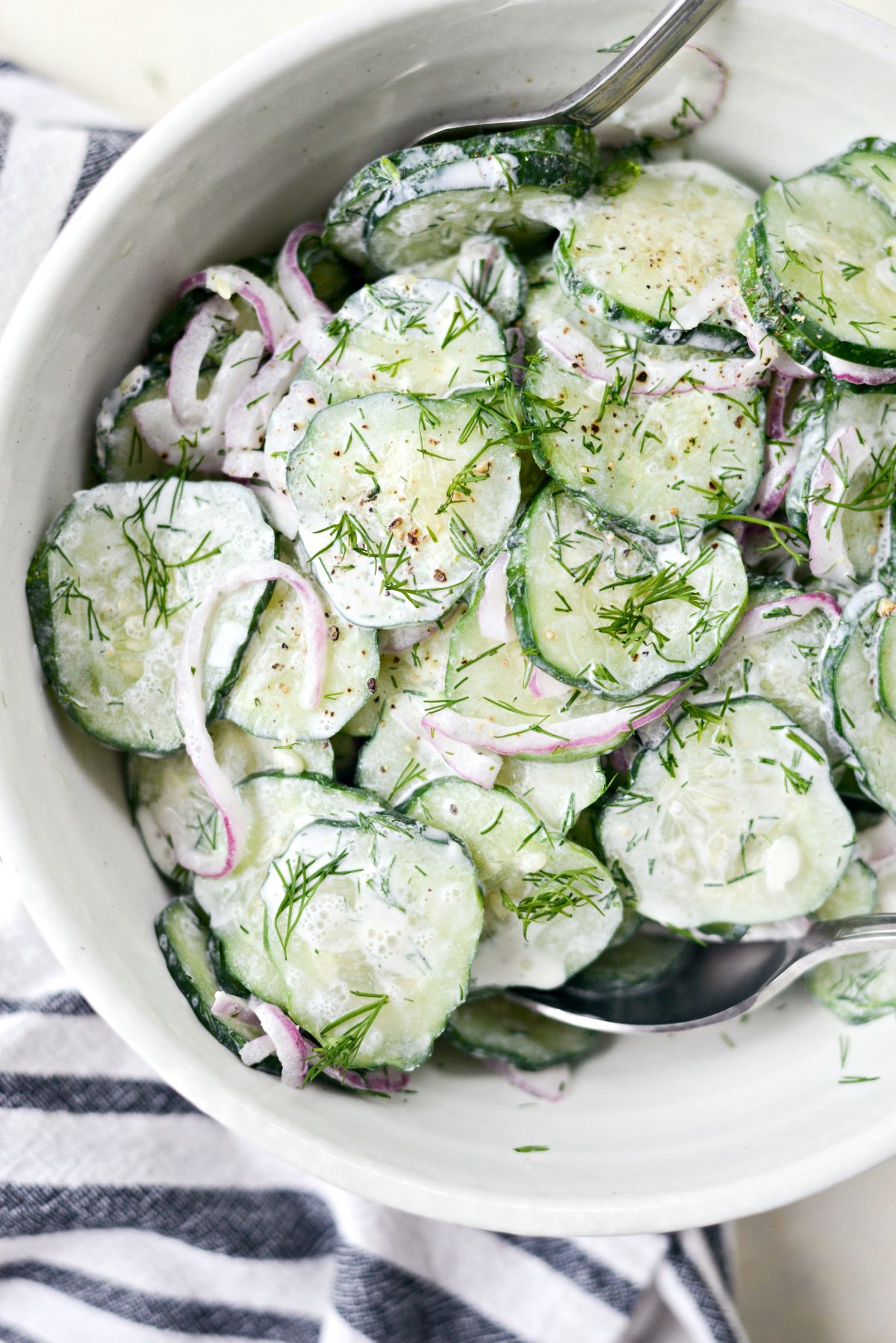 During the summer months friends and family with gardens are literally throwing their cucumbers at me and saying “here catch”! Like I’ll even have the bruises to prove it.

So, when life hands you lots and lots of cucumbers, there’s only one recipe to make (besides pickles, obviously) – my Great Grandmas recipe for cucumber salad. Or as it’s written on her recipe card: Cuke Salad. It’s simple, very retro but super fresh and delicious. 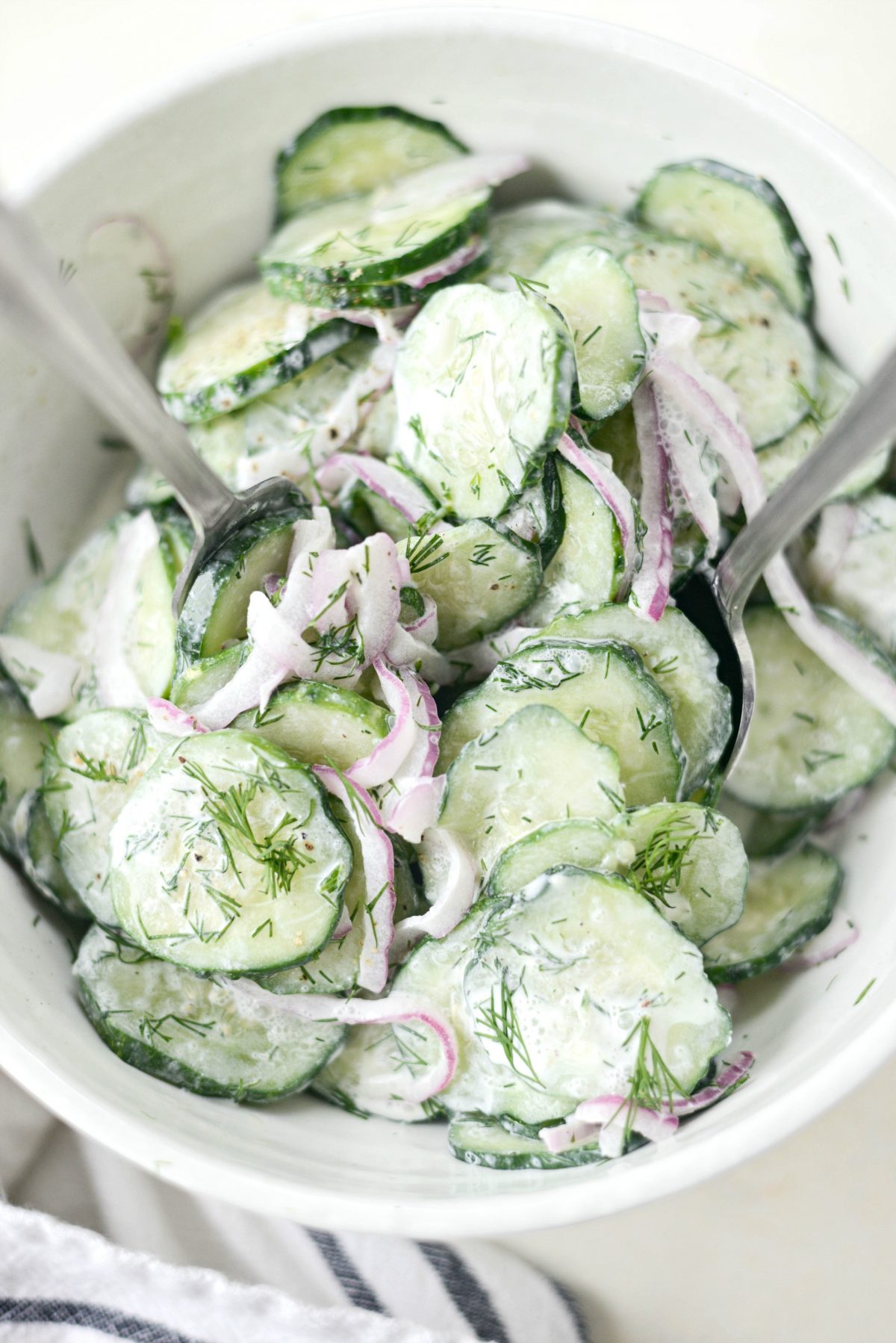 And I bet you fifty bucks that my Great Grandma Rita came up with this recipe from having an over abundance of cucumbers. 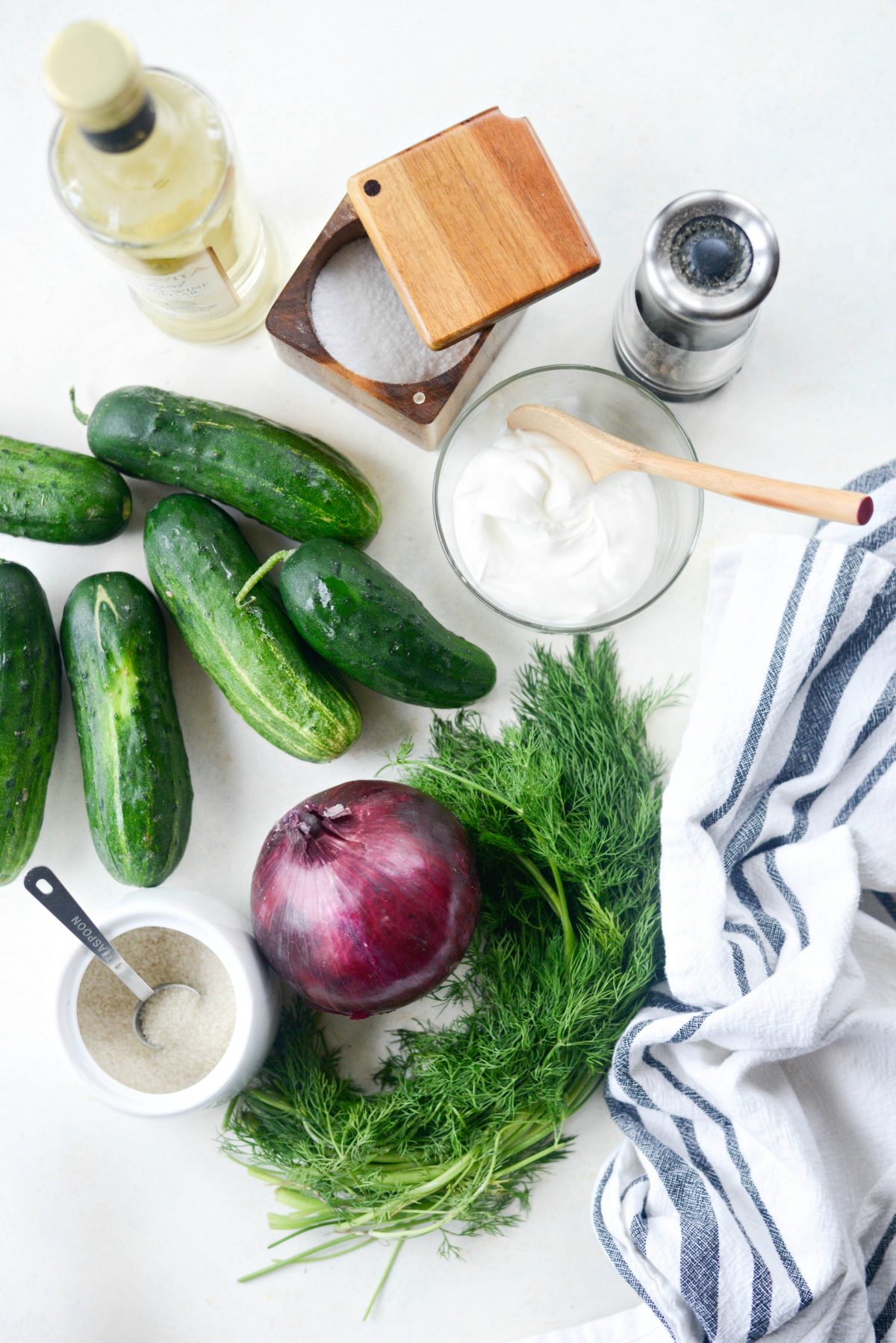 To Make this Cucumber Salad With Dill Dressing you will need: 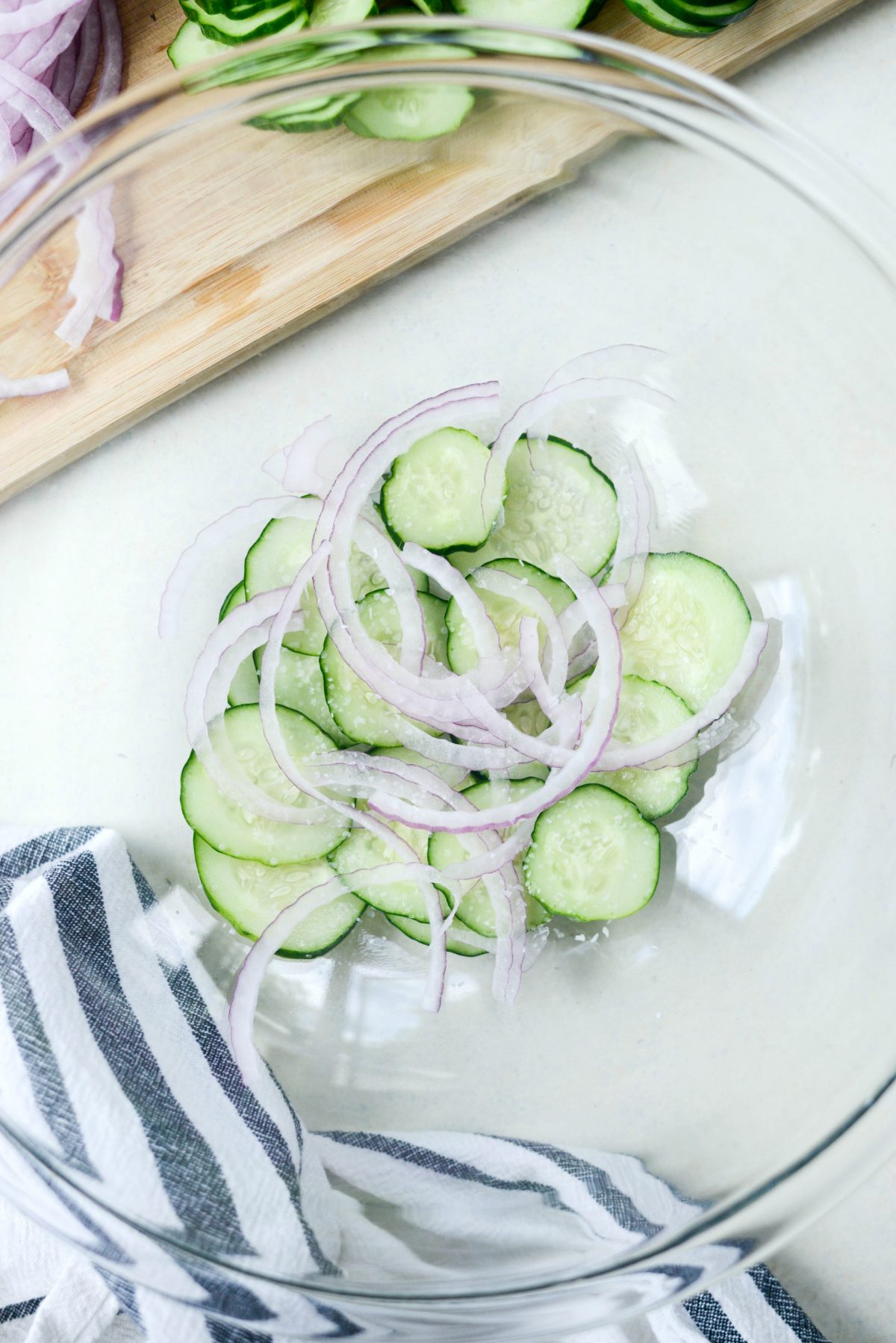 Prep the cucumbers and onions:

Trim off the ends of 6 small pickling cucumbers or 2 regular cucumbers. Slice them thin, but not too thin, think coins. Then peel and thinly slice up the red onion, should be about a cup.

In a large bowl, layer the cucumber slices, sliced onions and a pinch of kosher salt. The kosher salt will draw out the moisture and intensify the flavor! 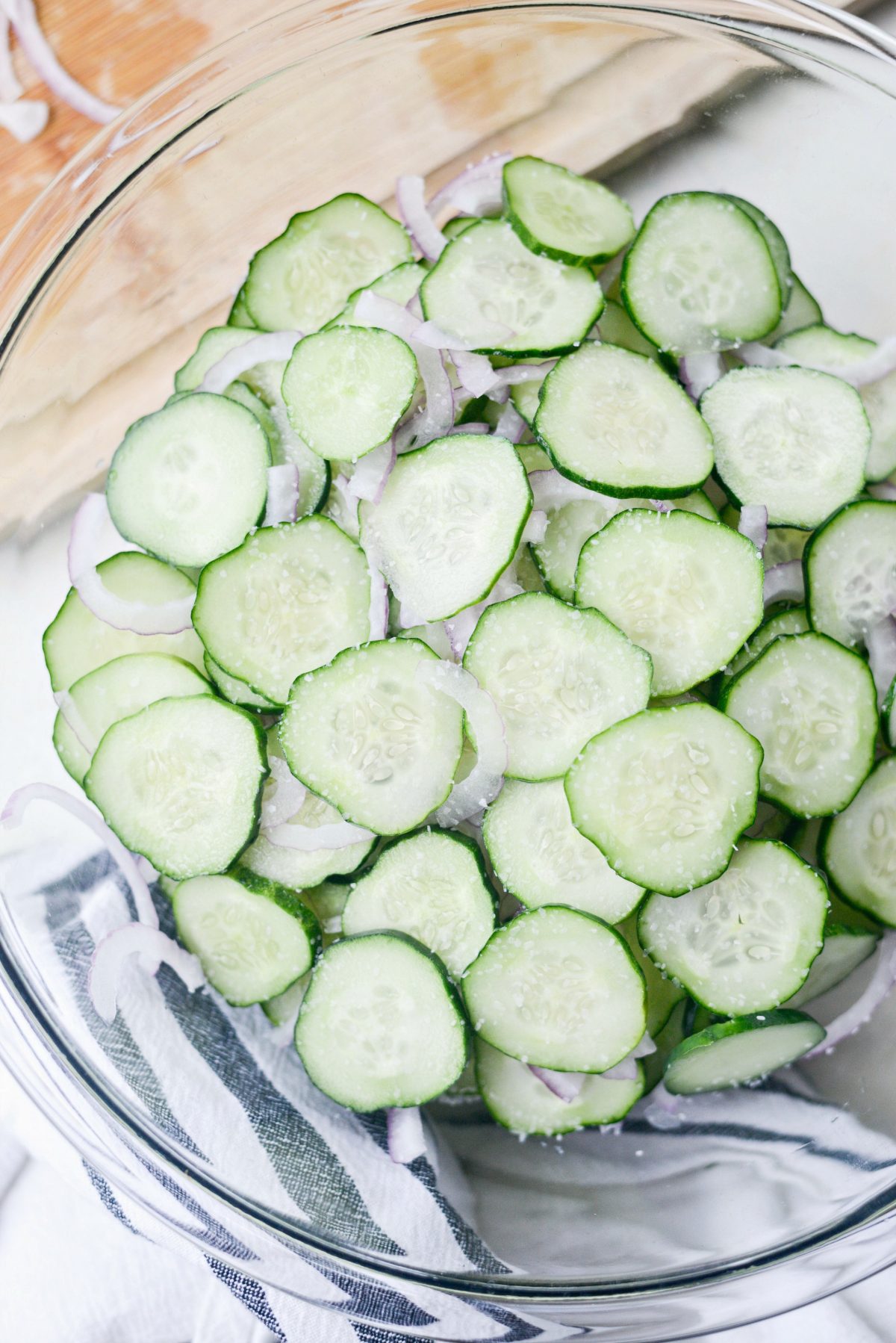 Repeat with the layering until all the sliced cucumber and onions are used. Tightly cover with plastic wrap and refrigerate for 1-2 hours. You could do it longer for softer cucumbers, however I like my veggies to remain a little crunchy. 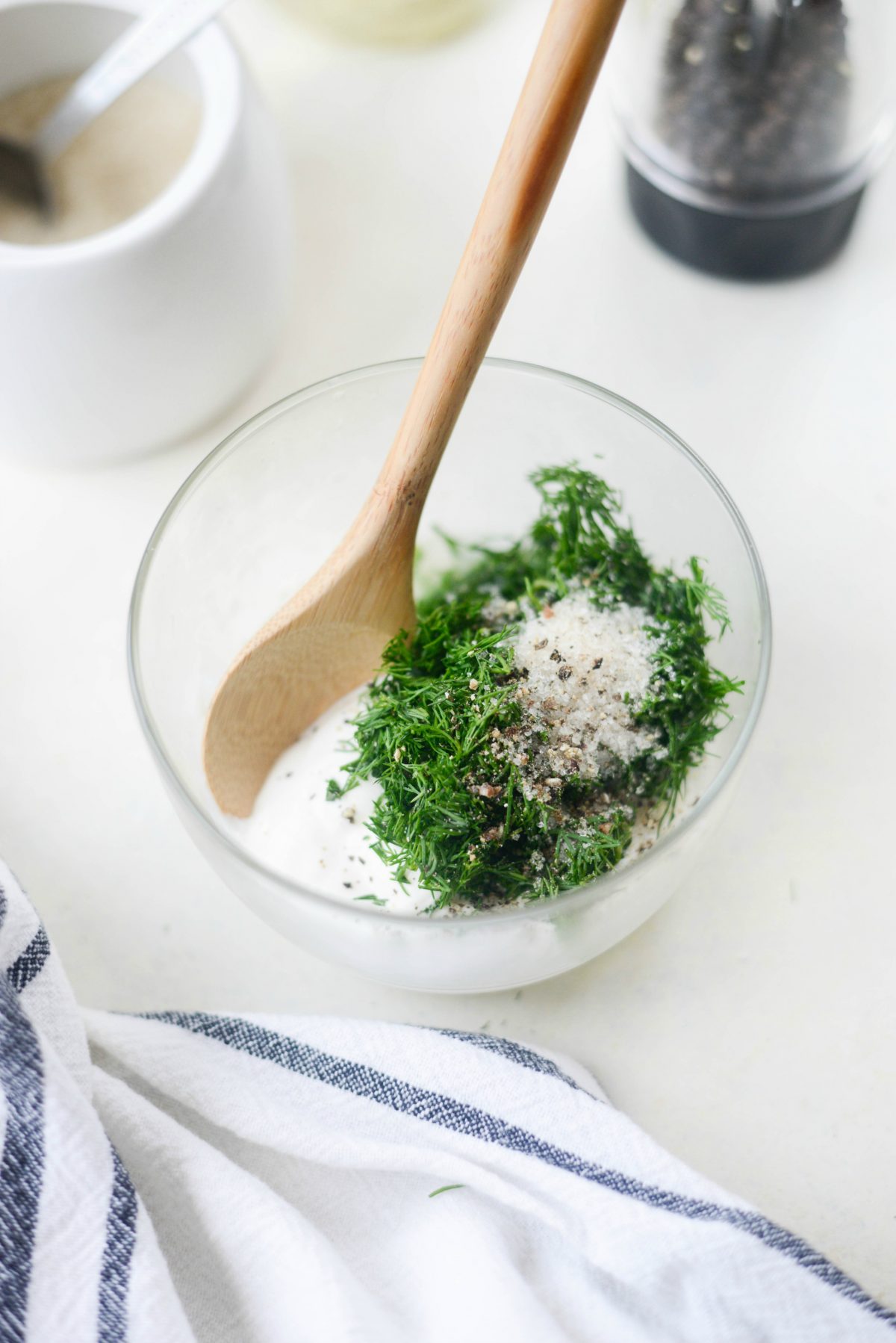 While the cucumbers and onions are doing their thing, measure out 1/4 cup sour cream, 2 tablespoons minced fresh dill, 1 teaspoon sugar, salt and black pepper to taste into a medium bowl. Add a few splashes of vinegar and stir to combine. 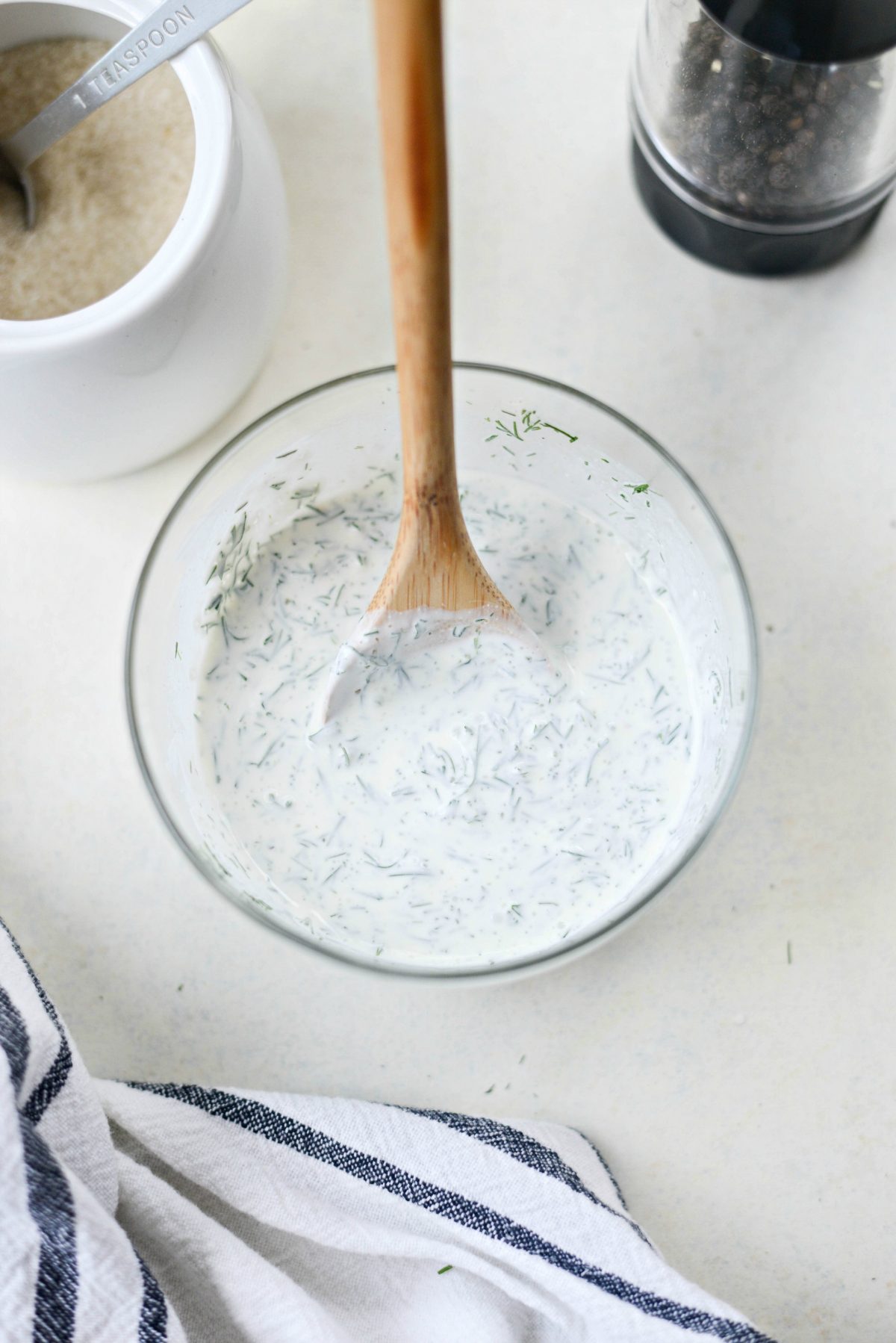 If it’s a little too vinegary then just add a little more sour cream and a smidgen of sugar until it balances out.

Once the time is up on the cucumbers use your impeccably clean hands to squeeze out all of the water from the vegetables. 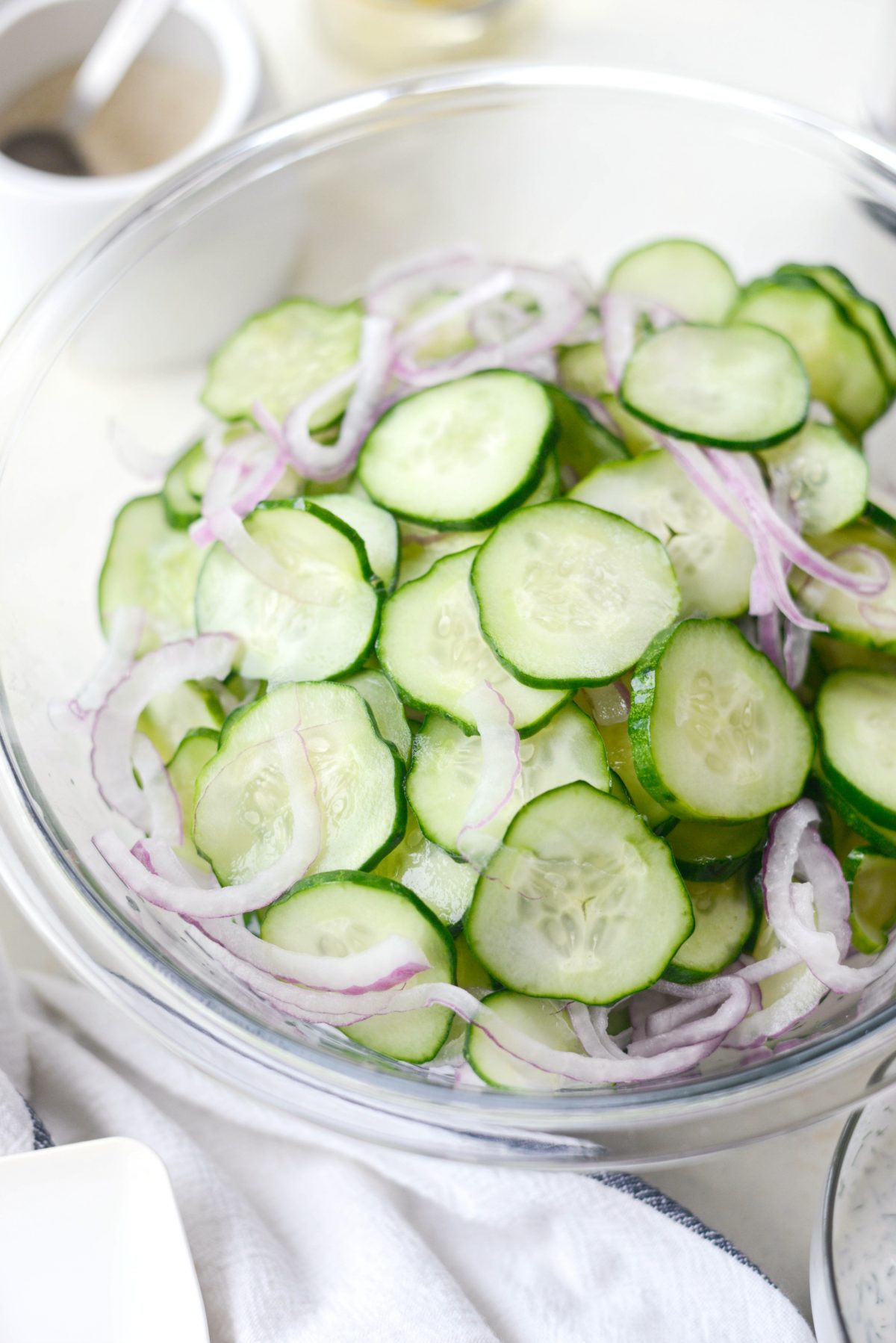 Work in batches, transferring the squeezed cucumber and onions into a clean bowl. 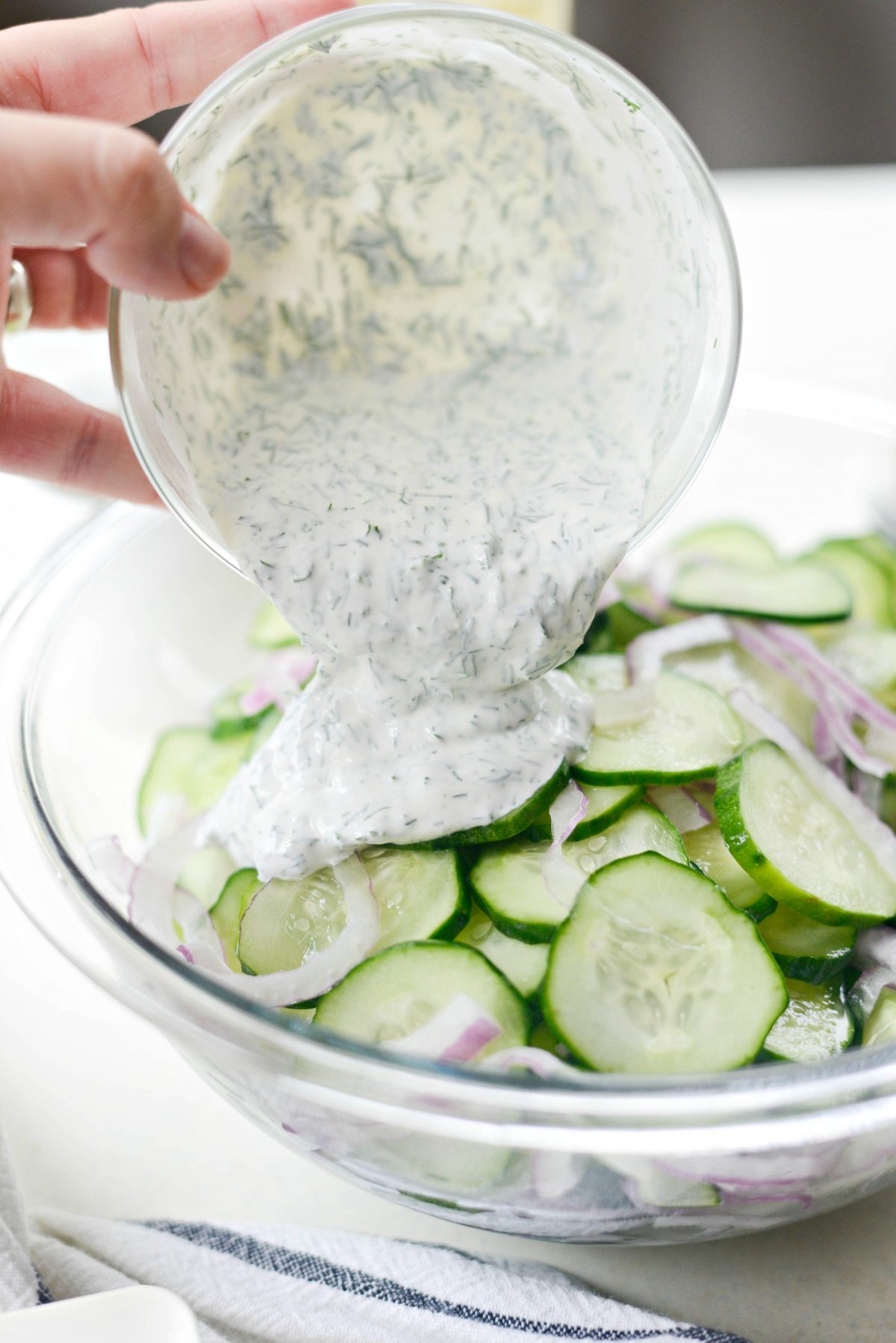 Add in the dressing, a little at a time until if you want yours a little less “saucy”. I prefer mine extra saucy! 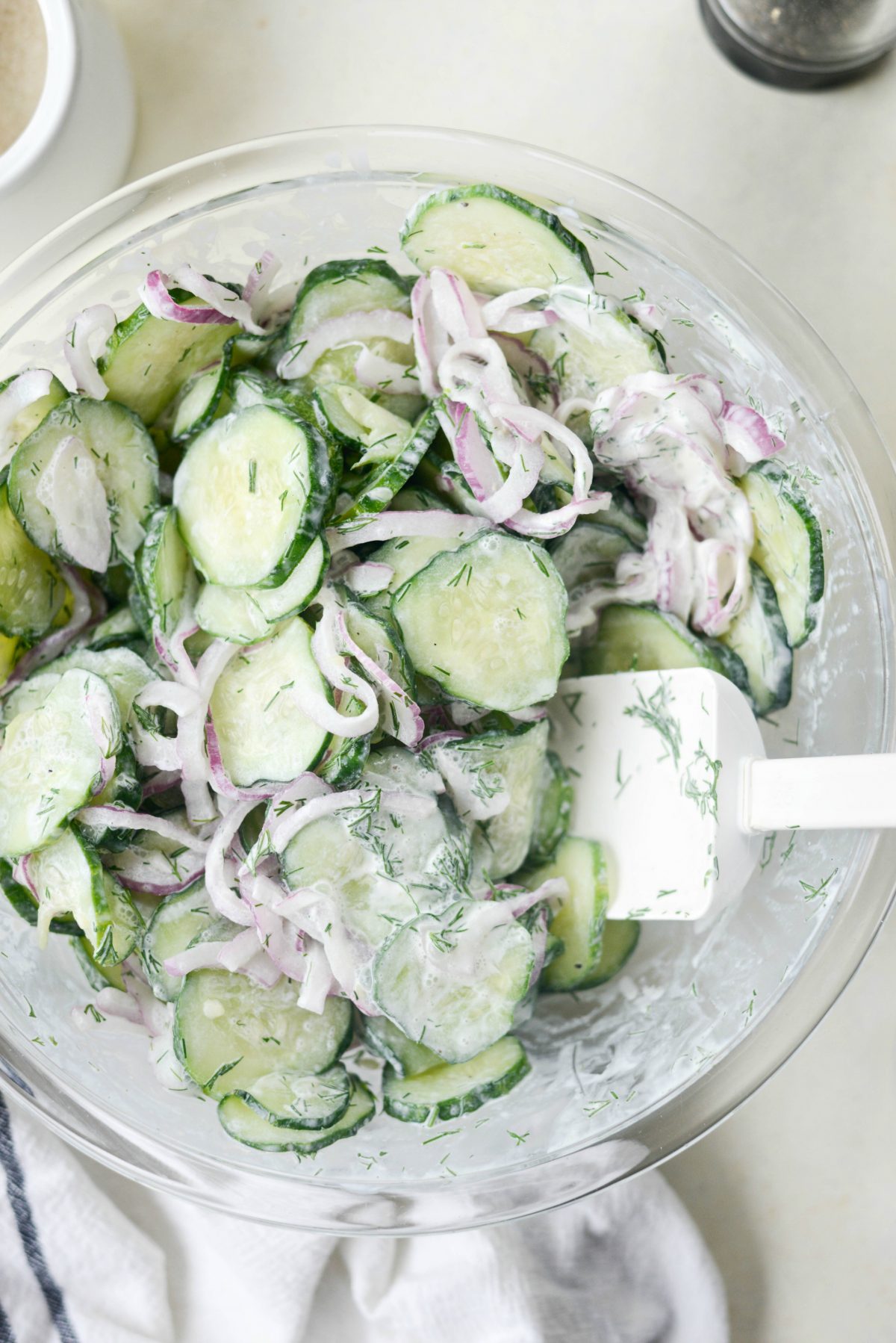 Toss and refrigerate for at least another 30 minutes or so. The flavors develop the longer this salad chills. 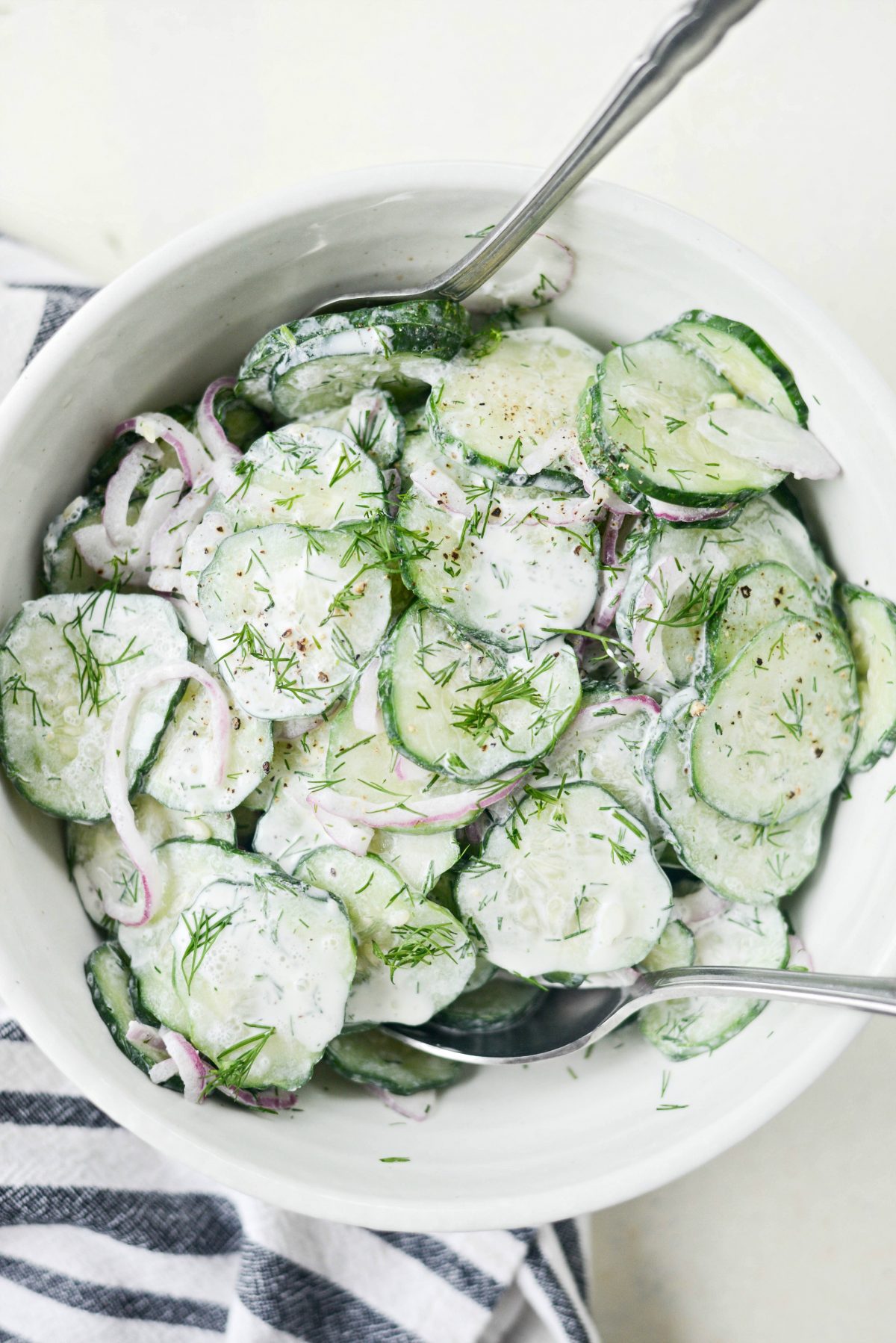 This cucumber salad brings back so many childhood memories.

Back then we used the cucumbers from our family’s garden. As a kid, I would frown at the onions and secretly eat just the cucumbers. But not to day. The onions are my favorite part! Only now it’s my girls turn to pick around the onions. Glad to see history repeats itself.

Serve this summer classic up next to your favorite main dish and enjoy every last bite of summer. 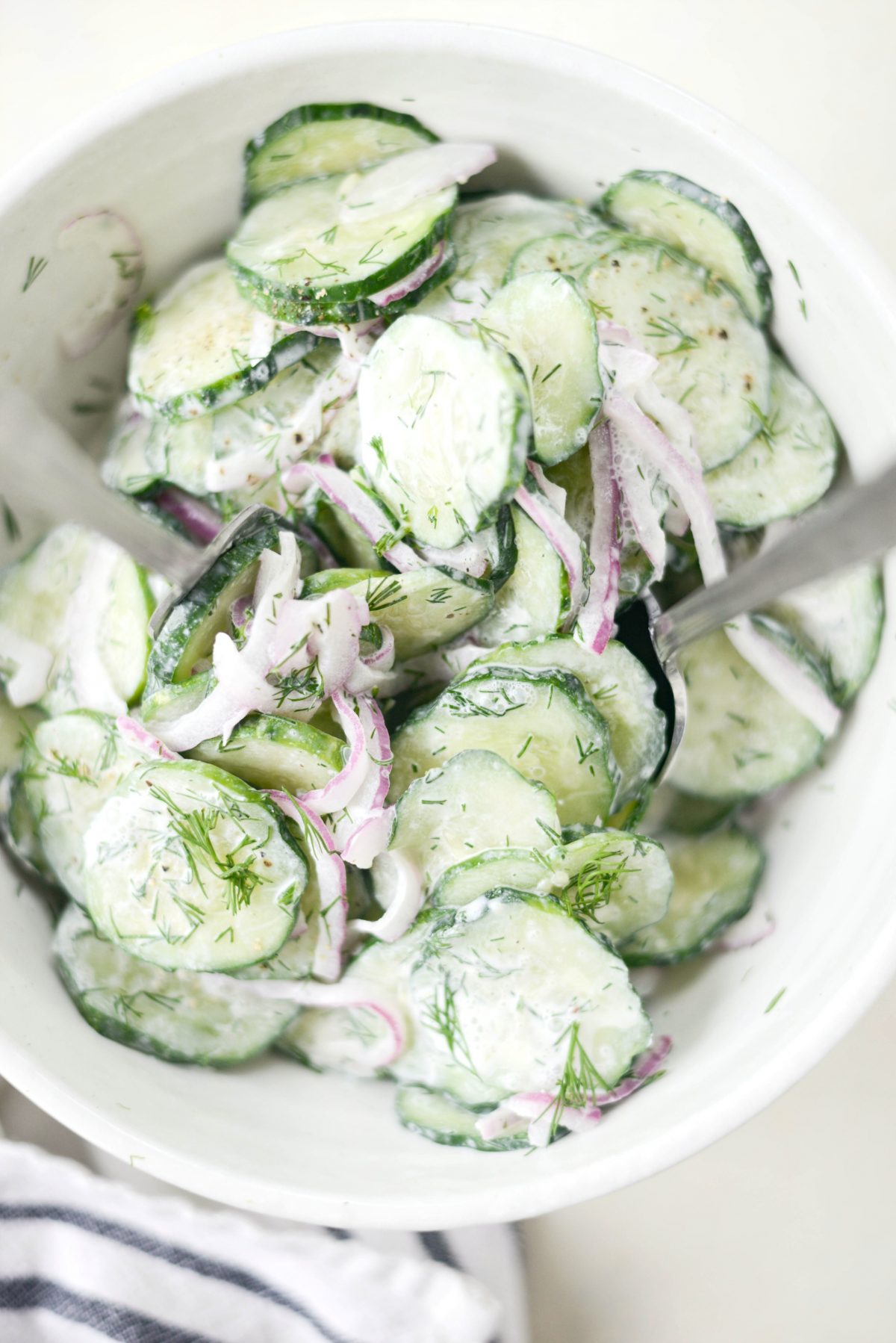 Enjoy! And if you give this Cucumber Salad recipe a try, let me know! Snap a photo and tag me on twitter or instagram! 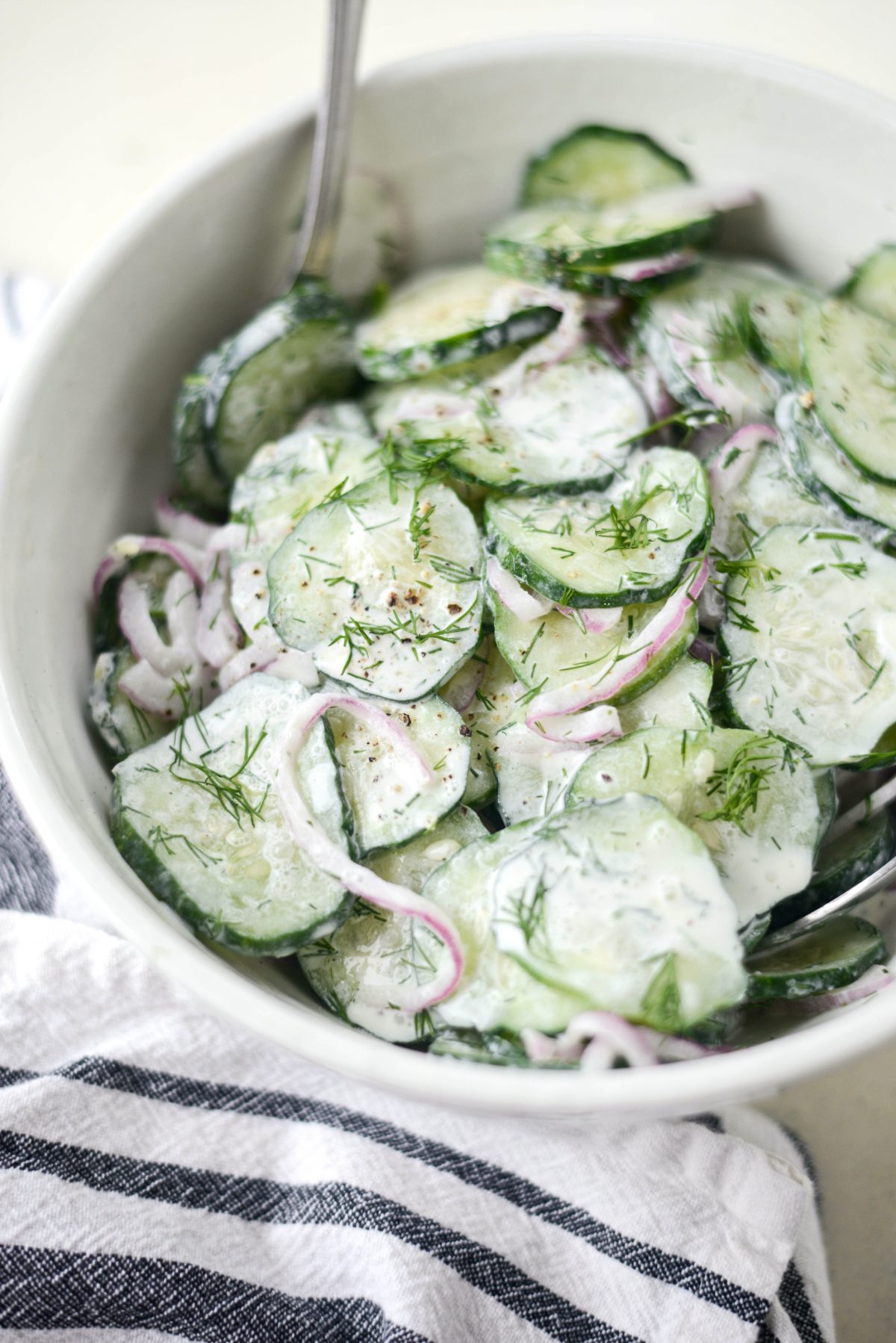 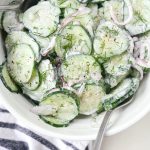